I’ve got some exciting reading planned for November, but I’m only setting myself a gentle TBR. (By gentle, I mean not set in stone.)

I’ve been finding more and more recently that I want to mood read, so I’m going to give myself the chance to do that this month. Below are some of books I’d like to read, but I’m going to see what I fancy picking up each week.

The year is 2172. Climate change and nuclear disasters have rendered much of earth unlivable. Only the lucky ones have escaped to space colonies in the sky.

In a war-torn Nigeria, battles are fought using flying, deadly mechs and soldiers are outfitted with bionic limbs and artificial organs meant to protect them from the harsh, radiation-heavy climate. Across the nation, as the years-long civil war wages on, survival becomes the only way of life.

Two sisters, Onyii and Ify, dream of more. Their lives have been marked by violence and political unrest. Still, they dream of peace, of hope, of a future together.

And they’re willing to fight an entire war to get there. 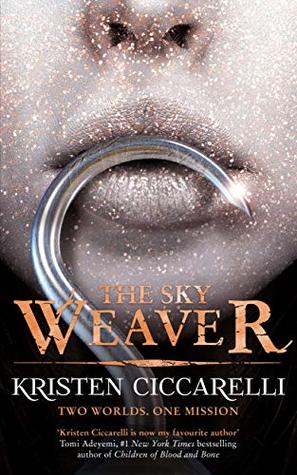 At the end of one world, there always lies another.

Safire, a soldier, knows her role in this world is to serve the King of Firgaard-helping to maintain the peace in her oft-troubled nation.

Eris, a deadly pirate, has no such conviction. Known as The Death Dancer for her ability to evade even the most determined of pursuers, she possesses a superhuman ability to move between worlds.

When one can roam from dimension to dimension, can one ever be home? Can love and loyalty truly exist?

Then Safire and Eris-sworn enemies-find themselves on a common mission: to find Asha, the last Namsara.

From the port city of Darmoor to the fabled faraway Sky Isles, their search and their stories become threaded ever more tightly together as they discover the uncertain fate they’re hurtling towards may just be a shared one. In this world, and the next.

Isabel has one rule: no dating.
It’s easier–
It’s safer–
It’s better–
–for the other person.

She’s got issues. She’s got secrets. She’s got rheumatoid arthritis.
But then she meets another sick kid.

He’s gorgeous, fun, and foul-mouthed. And totally into her.
Isabel has one rule: no dating.
It’s complicated–
It’s dangerous–
It’s never felt better–
–to consider breaking that rule for him.

Princess Guinevere has come to Camelot to wed a stranger: the charismatic King Arthur. With magic clawing at the kingdom’s borders, the great wizard Merlin conjured a solution–send in Guinevere to be Arthur’s wife . . . and his protector from those who want to see the young king’s idyllic city fail.

The catch? Guinevere’s real name–and her true identity–is a secret. She is a changeling, a girl who has given up everything to protect Camelot.

To keep Arthur safe, Guinevere must navigate a court in which the old–including Arthur’s own family–demand things continue as they have been, and the new–those drawn by the dream of Camelot–fight for a better way to live.

And always, in the green hearts of forests and the black depths of lakes, magic lies in wait to reclaim the land. Arthur’s knights believe they are strong enough to face any threat, but Guinevere knows it will take more than swords to keep Camelot free.

Rosa Santos is cursed by the sea, at least, that’s what they say. Dating her is bad news, especially if you’re a boy with a boat.

But Rosa feels more caught than cursed. Caught between cultures and choices. Between her abuela, a beloved healer and pillar of their community, and her mother, an artist who crashes in and out of her life like a hurricane. Between Port Coral, the quirky South Florida town they call home, and Cuba, the island her abuela refuses to talk about.

As her college decision looms, Rosa collides – literally – with Alex Aquino, the mysterious boy with tattoos of the ocean whose family owns the marina. With her heart, her family, and her future on the line, can Rosa break a curse and find her place beyond the horizon?

I’m currently reading my hardback of War Girls and enjoying the futuristic tech. I’m also about half way through Don’t Date Rosa Santos on audio and I love the small-town-big-drama vibes.

What are you reading in November? Have you read any of these books?