When V.E. Schwab announced that she was going on tour in the UK, I kind of screamed.

I mean, it was an internal, quiet scream, since I was at work, but a scream nonetheless.

I was excited. I hadn’t seen Victoria since YALC 2017 and (as you’ve probably guessed by now) she’s pretty much my favourite author of all time. So, obviously, I was going.

As soon as tickets were available, I booked to go to the Liverpool event. It was in the evening, so when I got to Liverpool, I went to Forbidden Planet in search of The Steel Prince and the FP special edition of The Near Witch.

I went to another comic book shop, looking for The Steel Prince.

They also didn’t have it.

Pinning my hopes on Waterstones later, I met up with Bec, Lauren, Amy, and Beth for pizza.

We chatted about YALC, blogging, awful books we’ve read, and more before heading to Waterstones to browse. And Waterstones, like the deity it is, came through.

At the top of the escalator, was a stand filled with copies of The Steel Prince. The day was saved.

I bought TSP volume one and the paperback edition of Vengeful, which I’d been after for a few weeks.

Once my new books were safely tucked in with the nine others (yes), we sat down and waited for the event to start.

And you know when someone significant walks into a room and that atmospheric hush descends? Well, that happened as V arrived.

The whole room quietened with anticipation as Victoria and her publicist, Lydia, sat down and then the in conversation part of the event began.

Victoria spoke about the experience of writing and publishing her first book seeing it go out of print 18 months later. She said that she was so grateful to her publishers for picking it up and republishing it years later and that it’s been incredible to see people discovering it anew.

She also described how her writing has changed over the years and said (while laughing) that her writing has ‘grown up’ since The Near Witch. She also said that if she were writing the book again now, there are lots of things she’d change (more queer characters, for one), but that the republished version of the book hasn’t been edited at all. It’s in its original form, as it was when it was first published in 2011. 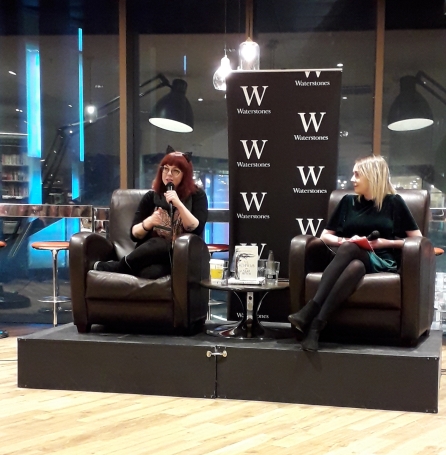 Lydia also asked her about her writing process and Victoria explained how she has a metaphorical hob where she keeps several pans.

The main project she’s working on is at the pan at the front of the hob and she focuses most of her attention on it.

But she always has her eye on the other pots at the back and occasionally takes their lids off to stir them or add more ingredients. I loved this metaphor and thought it was such an imaginative way of explaining her process.

After Lydia finished asking her own questions, Victoria did an audience Q&A. People asked about characters, covers, how her writing process has changed, why she loves villains, and her first visit to Liverpool, which she had hinted on earlier in the evening.

Victoria obliged and told us what happened when she visited Liverpool years ago. She was only about 22 and her friend convinced her that they’d both go to the UK for three months and it would be a blast. Victoria was trying to finish a book at the time so she thought why not? A change of scene will be good for me.

What actually happened was that her friend left her to go and live with her boyfriend for three months, and V ended up living in a shed that she’d had to rent off a random stranger. It was winter, there was no central heating, and there were spiders. Needless to say. she didn’t have the best time. 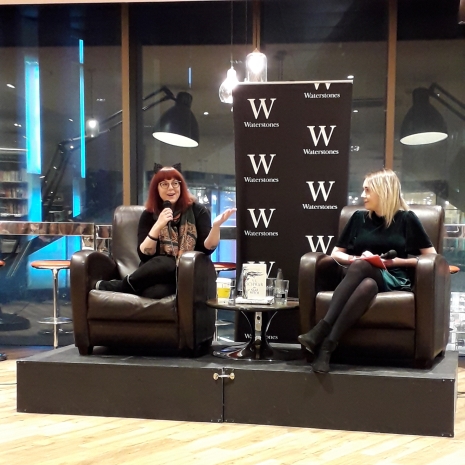 The way she told this story had the entire room in bolts of laughter.

Whether it’s in books on in person, Victoria just knows how to captivate an audience.

The entire in conversation section of the evening was perfect.

V had us all spellbound from beginning to end and you could feel the hum of excitement in the room. Listening to her talk is just inspiring. I could feel myself wanting to sit down and work on my own projects because she talked so passionately about hers.

After the Q&A, we queued for the signing. I had 11 books and I felt instantly guilty for bringing so many when I got them all out. 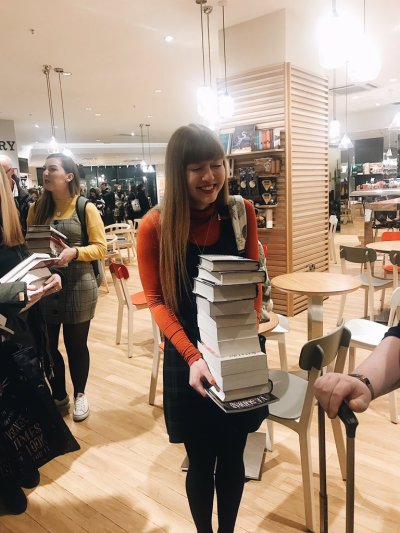 But this promptly dissolved into laughter when my friends mocked me for my giant pile.

We didn’t have to queue for long before we were at the front, and I got the same nervous excitement that I always get when I’m about to meet my favourite authors.

As I walked up to give Victoria my books, I began apologising for bringing so many. But she wouldn’t hear of it and said she was happy to sign them all. A true saint.

She also recognised me from Twitter which made my life, and we chatted about the international editions I’d picked up.

She was funny, kind, and friendly as she always is and I got such a surge of happiness that I was meeting her again.

And like the nerd I am, I took her a couple of presents. I know how much Victoria loves breakfast tea, and Ringtons is (in my not to humble opinion) one of the best there is. It’s also made where I’m originally from in Newcastle, so I got her a box when I was last there.

I also know how much Victoria likes cat ears, so I took her a pair that were black and glittery. She loved them.

She said they were the first pair that anyone had given her as a gift on tour and put them straight on. After that, we took photos and wrapped things up. It was probably the best author interaction I’ve ever had.

Once Bec, Amy, Lauren, and Beth had also got their books signed we took a group photo and headed off.

It was a fantastic evening that left me feeling happy, uplifted, and inspired. 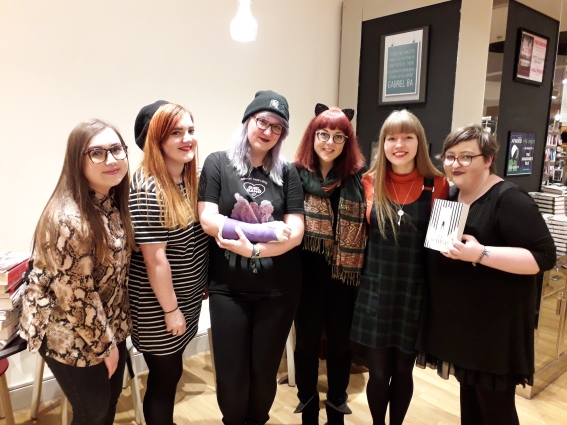 Have you been to any book events recently? Are there any authors you’d love to meet?

20 thoughts on “An evening with Victoria Schwab // The Near Witch, writing processes, and living in a shed for three months”